A book cover should tell you a lot about what’s on the pages between. But there’s a fine line between good artistic composition, communicating the most important parts of the story (in tone as well as literal items/characters), and making sure it doesn’t look like a mush of colour when you try to find it as a thumbnail-sized image online.

In this post, our long-time design collaborator Venetia Jackson takes us through the process for The Old Ways, and shows us some rather cool (we think, anyway!) initial sketches that you won’t find anywhere else online!

The first step I take in the process of book cover design is to focus on the story behind the book. Of course, I also have to remember key elements from the brief that will make up the composition of the piece. For this particular cover, it included: “silver stag prominent on the front cover on the right-hand side, figure visible in the tree-line, scene continues into autumn on back cover, stone city in the distance, tree line gives way to a darkish sky.”

From this I sketched a rough composition that I sent off to the editor (Sara) to make sure it was in line with what the author was after. The trickiest part is making a singular image that can be made into two separate images (front and back cover, as well as the spine), while making sure all three make sense to the viewer. So, I decided to follow a very shallow ‘U’ shape for the perspective, making a path that leads from the stag on the right to the city on the left.

The first sketch lightly plans out where everything is going to fit.

Once I got the go-ahead I began to add detail – starting off in greyscale so that I could focus on detail and lighting first, without getting distracted by colour. For inspiration of style, I researched a large amount of similar books and artistic pieces, making sure I didn’t stray too far from the original three art pieces that the author placed in the brief.

I started with basic shapes and a main direction of light, so when it came to adding detail I didn’t have shadows going in all directions.

I wanted to leave the archer with less detail so his appearance would be left more to the reader’s imagination. So, I made the light beams stronger, putting him in the shadows.

The front cover starts with a forest scene in summer (so lots of bold, lush colours to contrast with the silver of the stag), which then fades into autumn on the back cover. I decided to stick to deep greens for the grass, contrasting with occasional purple flowers. It’s lit with a light but vibrant yellow for the summer sun. 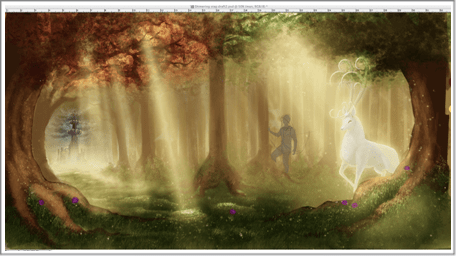 The ‘wraparound’ nature of a paperback cover lends itself to sliding-scale type colour patterns.

Deciding on a font:

Most commonly, an author will suggest a font, and I will always try to stick with that font. This is because the author would have the best feeling of which font would match the story. (Although there are some fonts that are a designer ‘no-no’ unless being used for ironic intent, Comic Sans for example. But as of yet, I haven’t had someone choose this font). In some cases I have to either suggest other fonts similar in tone and style, but in this instance I felt the author’s choice fitted with the rest of the image. I used the font, and had a lot of fun playing around with styles.

I made two that mirrored the glowing of the shimmering stag. One used similar colours to the stag, and another that mirrored the sun’s glow and the back cover’s autumnal colours. The third had slight stone texture to match the castle, but using the same sun and autumn colours.

Once I had created a selection of styles to the font, I sent it over to see which is preferred. I then worked on the image’s finishing touches – including a further foreground to fit within the cover’s framings.

It’s hard to say which was my favourite part of this project, but if I had to choose, it would be the transition of the image going from black and white into colour. Seeing the small added touches really bring it to life and add feeling. However, my favourite part of every project is the reaction from the author, and this one was particularly rewarding!

Phew! A huge thanks to Venetia for giving us a wonderful insight into how much work goes into a book cover here at Inspired Quill.

What do you think of the cover and process shown here? Do you guys want more posts like this as more books are released? Let us know!

Sign up to receive updates on releases, competitions, blogs and events. Oh, and a cool 25% off coupon for ALL of our eBooks for the rest of this year! (Unsubscribe at any time.)

You have Successfully Subscribed!