The Point of Fictional Damsels 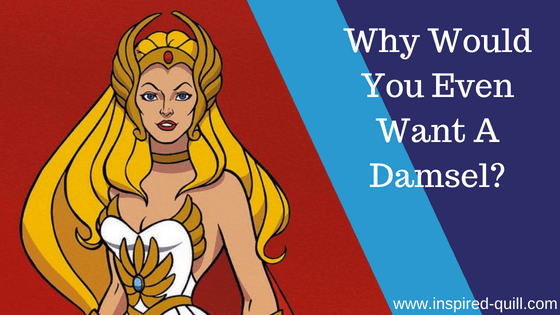 One of my favourite animated series was, and still is, The Mysterious Cities of Gold. It aired on the BBC in the very late eighties and it has always been a huge comfort and inspiration to me. There was only one sticking point (aside from navigator Mendoza’s tendency to do Bela Lugosi-esque dramatic poses with his cloak for no reason) – the character Zia.

Zia was an Incan girl taken from her village by Francisco Pizarro, because he believed she could lead him to a City of Gold. We meet her already kidnapped, and she spends a lot of the rest of the series in much the same way; being tied up, getting kidnapped, fainting, arguing with Mendoza, praising Esteban (the protagonist), or a combination of these all at once. Even at the age of five or six I felt uncomfortable with how useless she often was, designated as a plot device or a cheerleader. Granted, she was young, but her overall harmlessness was bordering on direct hindrance. It’s probably an indication of writing at the time being very heavily gendered – that action series were ostensibly for boys, so boys were given action and heroism and girls were seen as objects of affection, plot elements, or targets.

Zia wasn’t the only female character, but there was a continuing trend with any of the women in The Mysterious Cities of Gold that they were only useful en masse to overpower comic relief or incidental characters, or individually lacked the nuance that many of the male characters had. There were more female incidental villains than there were male ones, who tended to have longer dedicated arcs. Throughout the series there’s a tacit dismissal of the strength and agency of women, and I’m really glad that we live in an era which has evolved from 80s gendered fantasy cartoon writing.

Representation in other Animated Series

Other series did better or worse by varying degrees. Thunderbirds had Lady Penelope, although most of her heroism happened from the back seat of her armoured Rolls-Royce. Danger Mouse had no female characters at all. Thundercats and He-Man faired a little better, with some decent female warriors who weren’t knocked out with a single riposte or given attacks as a throwaway punchline. It’s just as well that the Transformers were all robots, because having only one female-coded Cybertronian to an entire planet would lead to some very awkward conversations about repopulation.

The first woman-led show I remember watching was the original She-Ra, and that was awesome, but aside from that there still weren’t many truly strong female characters for my sisters and I to be impressed by. Thankfully my sisters saw inspiration in the characters they liked regardless , albeit they were all male, because they didn’t aspire to just being kidnapped or screaming, or to stand around at all. When we bought toys, we casually changed genders around to make numbers match. But it makes me wonder how different it might have been if there had been more women in kids’ TV at the time. Would it have changed my sisters’ tastes, or aspirations?

Books and the feminine character stereotype

I feel like books have always been far ahead of this curve for decades, maybe even longer; a haven from the stereotypes still occasionally darkening the screen. Girls have been fighting their own battles and walking their own paths for years.

Scott O’Dell’s Island of the Blue Dolphins was an excellent and stirring adventure, and the Deptford Mice trilogy by Robin Jarvis starred a powerful young female mouse named Audrey. Both of these were captivating stories that I read several times over. My little sister loved The Worst Witch. The Queen’s Nose and numerous Roald Dahl books gave girls amazing and frightening adventures to power through.

Books had the universally progressive advantage because they explore the emotions behind a hero instead of just their physical portrayal, and heroes are universal to all genders, ages, and races. Even if you know a character is of a particular gender, your story isn’t seeing them directly, but sharing their story.

And if that isn’t how we should all be, I don’t know what is.

Today’s damsels – a matter of media?

Having a girl or woman as a character is now a very big thing in media, and we have an incredible array of new titles to choose from that give equal or better position to girls, women, and even nonbinary representation. The new She-Ra is an incredible tribute to the old but builds itself a striking, powerful new universe with amazing dedication and passion. The Dragon Prince has Rayla as an adept combatant deuterogamist with her own story and motivations, not only those of the main princes

The awareness of whether a character is male, female, nonbinary, trans, intersex, gay, lesbian, etc, is so much greater because we need that strength of representation. Those who had no icons in the 80s and 90s are now looking on behalf of their children, or the children are asking directly, or heck, even adults need passion, inspiration and creativity.

We all need heroes as reflections of ourselves, and in ourselves also, and that in all our shapes and sizes. Personally, I’m elated by all of this new media, written or visual, for any of us to see something of themselves.

It’s hard to explain to critics (usually men) that a replacement, addition, or development doesn’t erase the vast, overbearing library of protagonists they already have, or that it isn’t done for tokenism or ‘political correctness’. These people exist, whether they want to believe it or not. Women, Black, indigenous, people of colour, LGBT folk, all EXIST, they’re not just an inconvenience to a white male narrative. That the ‘minority’ or ‘pandering’ character ACTUALLY has something of value or could have experiences never seen before seems to be a scary, alien, and offensive prospect, and in truth it’s probably down to never having a viewpoint challenged before.

When all of your media is made, implicitly, to cater for you, having something ostensibly for someone else can be a culture shock. But sucks to be close-minded, they’ll have to deal with it. Anyone who’s making such a noise about it is probably someone who most needs to watch or read it.

Every child deserves to see themselves represented.

Being part of the solution

I’m really grateful to have had the experiences I have to create my stories. I have often boasted about how many women are in my work, but honestly they haven’t gone nearly as far or as hard as many already have, for years.

Those who have gone ahead and lit the path on fire to show anyone where they can be, and who they really are, are an asset and inspiration to all of us. I want to go further in my own work and give an even greater range of characters for kids to draw strength from. Because if nothing else, for my sisters’ sake, I would have loved them to have more toys to play with.

In 2012 Hugo moved to the United States to live with their wife Madison, who is a native to North Carolina, where they both dote over a lovely corgi-cross named Tohru. In their spare time, Hugo is heavily involved with the furry fandom, standing as an advocate for LGBT+ rights, mental health awareness, inclusion, and artist/author visibility and fair treatment.

Find out more on their website or on their IQ author page.