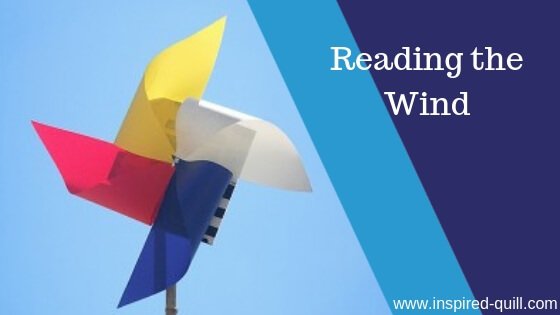 I never thought of myself as a writer.

I read fiction nonstop and even wrote some Tolkien fanfiction, but in my mind, that didn’t make me a writer; I also taught technical writing to college students. About that kind of writing, I counted as an expert. Still, that didn’t make me a writer. People who wrote novels were special. I wasn’t one of them. I didn’t know how to do that. And then, one day, some irresistible urge came calling on the wind, and I decided to try. I say “one day,” but it would be more accurate to say “one year” because it turned out I was right about not knowing how to write a novel.

The Wind Reader was one of the first books I drafted, but it spent years on my hard drive, coming out every so often to be revised using the critical eye and skills I developed as I went to workshops, read how-to books, and drafted several more novels. I gradually built up craft knowledge, but the most important thing I learned is that I was a writer all along.

There’s no other definition. Publication is nice, but it’s not what makes someone a writer.

On the other hand, publication really is nice!

So when I finally decided The Wind Reader was ready to go out into the world, I looked around for a publisher I could trust with my baby. I wound up submitting to Inspired Quill by following a trail of signs. On a writers’ site, authors wrote that they’d had good experiences there, that this was a publisher that would treat me and my book well. Inspired Quill’s submissions guidelines told me it responded to rejected submissions with a brief critique. That’s unusually generous. Some small presses don’t even send rejections. I thought it would be valuable to get a critique along with my rejection.

But Inspired Quill didn’t send me a rejection.

They sent me an acceptance. As any writer will tell you, this is a Great Moment in Writing.

Before the acceptance was final, however, Sara suggested a Skype interview so see if Inspired Quill and I were a good fit. As any writer will also tell you, there are small presses and then there are small presses. On its website, Inspired Quill describes itself as a “Social Enterprise.” I found that intriguing, and during the interview, Sara elaborated. She sees Inspired Quill as more than simply a publisher that produces a product to sell. Rather, Inspired Quill sees itself as part of the web of community. So, for example, it donates part of its profits to charity and runs subsidized workshops. In a phrase, it hopes to do well by doing good. That fit with the way I wanted to see myself and my work.

I want to sell books. But for me, writing is about more than that. It’s the best way I’ve found to examine human experience and touch the human heart. I believe I can do that in partnership with Inspired Quill.